A Marketing View of the Dentist’s Chair

I got to visit my dentist last week and has become my habit lately, I asked him how business has been.  His response was about what I expected – given how easy it had been to change my appointment – “it could be busier”.  So I asked him what had changed.  Dentistry – at least to me – didn’t seem to be something that was affected by the economy in any major way.

He went on to explain to me that overall, his biggest issue, is that we as a population are healthier.  It used to be that one hygienist could keep one dentist busy.  Then it because One and a half to one, and now, he told me, it almost takes two hygienists to keep one dentist busy.  So essentially, in the 25 or 30 years his practice has been around, the caseload he has to carry, has had to double for him to keep business even. Challenging issue to have.

So I asked him my second favorite question – “what’s your unique difference?  Why should people come to you instead of one of those other firms that advertise constantly, send out the coupon promotions, etc, etc.”  His answer told me that he had at least thought about this.

He said that they were a family run practice as opposed to a corporate one – his patients saw the same staff each time, as long as they wanted to; they were paid on salary, as opposed to mostly commission as is common at the “newer” practices (this was news to me), so they were able to offer a recommendation of a variety of treatment options as opposed to the one that made them the most money.  And because there was no stress about generating revenue and commissions, he had very little staff turnover, contributing to the ability of patients to develop long relationships with someone they only see every six months. 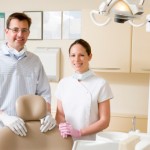 So now they need to get this message out there.  I happen to like going to see a dentist and hygienist that want to see pictures of my kids. Who ask about what I am doing and actually remember it from visit to visit. I like  to have a relationship with my care providers in an increasingly impersonal world.  I know there are others like me out there. They just need to find them.  And they are taking some steps – ones that I was actually impressed with for a small practice in a small town.

They have moved their reminder system over to email – they asked me for my email address when I came in this time.  I got an email later that day asking me to rate the service and for my permission to post the comments on their web site.  And the system they are using for this went one step further – it asked me for a referral! Since I gave them a good rating, it asked me to think about someone else that would like to work with them and forward their information on.   Nice system - It thanked me for the business, it asked me to rate them and it asked for a referral.

What else should they being doing? Being part of every new homeowner info packet that goes out around them.  Network with realtors. Network with doctors. Create a talking logo that describes what they do in terms other than just dentistry. Talk at the schools. Create unique programs for local businesses that also put heavy emphasis on long term relationships. Promote their “unique” difference.  In short – marketing.

I know that if I needed twice as much business to say at the same level, I’d be trying new things every day.  What ideas do you have that you’d care to share?