Pandering to Your Audience for Viral Discussions and Testimonials 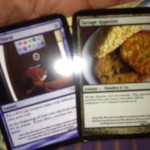 Sometimes, we all like to be catered to - targeted very specifically.  When I was at Gen-Con 2013, a great example of this was from Noodles and Company that made special coupons disguised as Magic the Gathering cards.

And they were awesome for doing so. 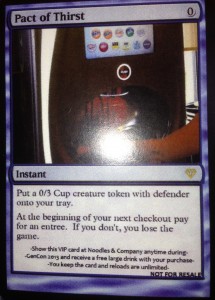 1) The coupons were specifically targeted to be handed out and were done just tongue-in-cheek enough to know that someone actually, you know, cared about the audience enough to engage us in 'our' medium.   This would have gone tragically wrong if they had done the same type of coupons on standard playing cards, or Monopoly cards, etc.

2) The coupons were multi-use coupons, that they left with the customers all week-  Asking us to return for carb-loading over and over again.  And since they became de-facto collectibles from the convention, I know I'm not the only person to have held on to at least one of the coupons as mementos.   Though I may be the only one to blog about how awesome they are from a marketing standpoint.

3) The coupons were talk-able:  The offer was completely unremarkable.  Free soda with purchase. Free cookie. Blah.  Whatever.

The talk-able, remarkable story was the coupon itself -  At the convention, we shared these coupons with our friends, who asked for the coupons themselves-  and shared them with others. 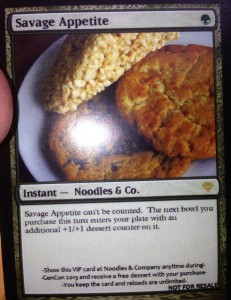 How do you make coupons, traditional relics of the outbound, attention economy relevant?

Apparently, that's not that tough.

You make them inbound/social/viral marketing worthy by making the coupons themselves loveable.

You can do that by knowing your audience a bit better, and pandering to them a bit more. 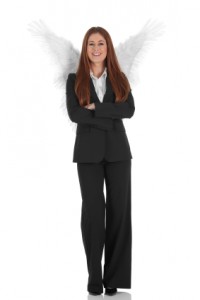 How Well Do You Know Your Perfect Customer?

Why Are You Leaving Your Prospect’s Business Card on the Table?