I considered labeling this post/case study “Why your blogging isn’t working” but instead, I’m presenting the results for an HVAC client of ours in NY who had been using inbound marketing via Hubspot since February.

I just started doing this case study when I was asked:

"One of my friends said he tried blogging and it didn't work at all for him.    How do you know if this blogging and 'inbound marketing' is working for us?"

We happen to be keeping metrics for them with both Google Analytics and Hubspot- and we were able to compare both month to month and year to year using those tools- so we can indeed make comparisons and see the differences.

The traffic we looked at was based on lead optimization.

Yes, we have call tracking set up so we do in fact know when and where a lead exactly comes from.

Doing more blogging is the "best" way to improve your organic search results (not rankings per se- that's actually a different and less relevant question). You want traffic that becomes sales calls- which is different than ranking high for a key-phrase that nobody actually, uses.

We did quality Keyphrase research.  I have my own method that works the miracle we did here, which I’m happy to do for you- though I don’t give away my exact formula.  Kinda like Coke- trade secret. But you sure can have the product of the formula. 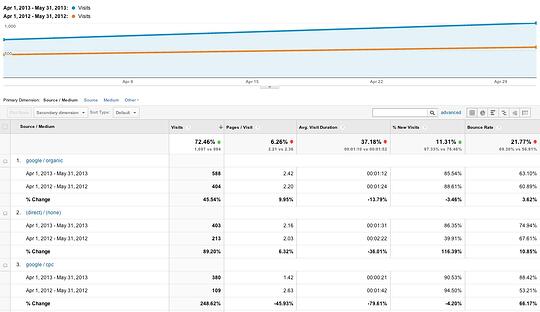 As for that proof:

We see a 45% increase is almost completely attributable to the blog and other local search optimization techniques we’ve implemented.

And that traffic is staying on the website- And calling, though for this example, they only implemented call tracking this year, we don’t have metrics from last year to consider.

And every bit of that will pay dividends next year too!

We can see in this chart that their pay per click spending went up- nearly 75% of what they were spending last year- and wow- it is driving results- a 248.6% increase in clicks.  BUT- look at the bounce rate- 88.42% the came to the site as far as Google is concerned, left immediately.  (Google, by the way, still got paid) So the actual traffic via Pay per click was 44 legitimate visitors (in Google's estimation).

In the Organic search, there was a 63% bounce rate, so, a more fair number would be 370 for the organic search strategy we're employing vs 44 for the Google ad-words strategy.

I threw out a lot of numbers- so here is the succinct difference:

We spent much less on the blogging than the last 2 months of Pay-per-click.

The results in total number of leads are:

* For those inquiring minds about the dip in February in the first chart: this was a hosting snafu caused by a hosting company that ‘owned’ the Google analytics account and the previous website and wouldn’t give us the tracking code to use in Hubspot.