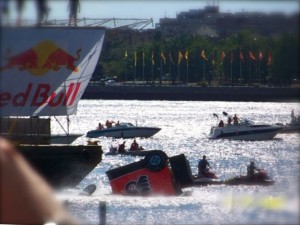 Ah, Labor Day weekend, the end of the summer.  My family and I had the unique opportunity of spending a beautiful Saturday on the  “other” Jersey shore -  the Camden, NJ waterfront.   Normally, we skip over TV commercials, but you could not live in Philly and miss the Flugtag ads.  Compelled by what promised to be a strange and side-splitting day of laughter, we went to view the Red bull Flugtag.  For those of you who are not familiar with the event, a quick history lesson, stolen directly form the Red bull Flugtag website:

The first Red Bull Flugtag took place in Vienna, Austria, in 1991. Since then, more than 35 Flugtags have been held around the world -- from Ireland to San Francisco -- attracting up to 300,000 spectators. The record for the farthest flight-to-date currently stands at 195 feet set in 2000 at Flugtag Austria. The U.S. record stands at 155 feet set in Nashville, Tennessee, in 2007. 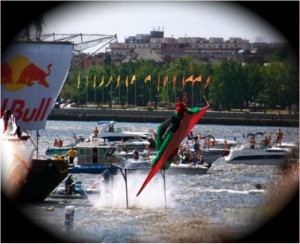 Red Bull Flugtag challenges teams of everyday people to build homemade, human-powered flying machines and pilot them off a 30-foot high deck in hopes of achieving flight! Flugtag may mean, "flying day" in German, but all these crafts ultimately splash into the waters below. They are judged not only on their flight's distance, but creativity and showmanship as well.

Each team builds its craft around a theme, and before taking off, teams perform a brief skit. They then pilot their machines off the pier, and teams are judged on flight distance, the creativity of their craft and showmanship.

It was an extraordinary event and as always, while watching, my mind turned to marketing for my small business clients.  I learned several things that day that I will take forward:

The last four lessons are the most important

Darling Jimenez is a passionate graphic and web designer committed to delivering on time products that can generate leads and provide a friendly user experience. With more than 5 years of experience, she loves to stay on top of the latest design and marketing trends.

10 Ways To Lose a Customer 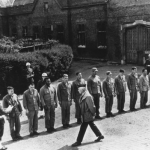 A dirty dozen ways to grade your marketing efforts